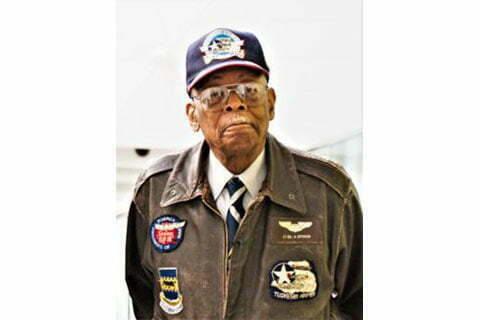 In January 1944, graduated from pilot training course at Tuskegee Army Air Field followed by three months of Combat Training at Selfridge Field, Michigan. He served as a P-51 fighter pilot with the Red Tail, 332nd Fighter Group, 301st Fighter Squadron in Ramitelli, Italy. In the course of providing protection from enemy aircraft, he flew 18 long range escort missions for B-17 and B-24 bombers. On August 12, 1944, three days prior to the invasion of Southern France, he was shot down by ground fire while strafing radar stations on the coast. Captured by German troops and interned for nine months as a prisoner of war, he spent the first five months in Stalag Luft III, 80 miles east of Berlin on the Odor River.

On January 29, 1945, when the Russians started their offensive, the prisoners, American, British and French, were transferred to Stalag VIIA, Mooseburg, approximately 20 miles north of Dachau. Liberated by American forces on the 29th of April 1945, he visited Dachau to witness the results of the atrocities committed by the Nazis. He was discharged from active duty in 1947 and retired from the reserves in 1969 with the rank of Lieutenant Colonel.

Following the war, he became in an elementary school science teacher in the City of Detroit. He retired as an assistant principal in 1979. He is an active member of various church, educational and alumni organizations. He is one of the founders of the Detroit Chapter of the Tuskegee Airman (which is the original chapter) and is a member of the Tuskegee Airmen Speaker Bureau.

As a Life Member of the Silver Falcon Association, he served on a voluntary basis as an Admissions Counselor for the United States Air Force Academy. He is a Life Member of American Ex-Prisoner of War and is a Perpetual Member of the Military Order of the World Wars. On October 14, 1995, he was enshrined into the Michigan Aviation Hall of Fame.